In their bold new book, Anna Coote and Andrew Percy argue that this transformational new policy – Universal Basic Services (UBS) – is exactly what we need to save our societies and our planet. 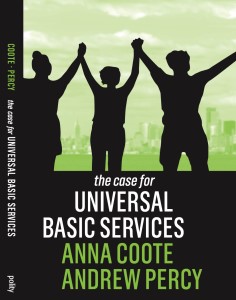 In their bold new book, Anna Coote and Andrew Percy argue that this transformational new policy – Universal Basic Services (UBS) – is exactly what we need to save our societies and our planet.

Trials of a Universal Basic Income are quite widespread. But the authors take things much further. The old argument that free markets and individual choice are the best way to solve pressing problems of poverty, inequality and environmental degradation has led us to catastrophe, and must be abandoned. They show that expanding the principle of collective universal service provision to everyday essentials like transport, childcare and housing is not only the best way of tackling many of the biggest problems facing the contemporary world: it’s also efficient, practical and affordable. Anyone who cares about fighting for a fairer, greener and more democratic world should read this book.

This is a proposal whose time has come. The idea is that healthcare and education should be provided as universal public services to all who need them is widely accepted. But why leave it there? Why not expand it to more of life’s essentials? Anna Coote, Principal Fellow at NEF and Andrew Percy, co-director of the Social Prosperity Network at UCL, argue that this transformational new policy – Universal Basic Services (UBS) – is what we need to save our societies and our planet.

Recently I watched the BBC Panorama “Universal Credit: One Year On”  . For generations, governments have sought to simplify the benefits system. The latest attempt, Universal Credit, merging six benefits into one was supposed to make life better for claimants. But it is not working. It was heartrending to watch as one enthusiastic young woman on a zero hours contract became discouraged as she was given little work and struggled to make ends meet. Another young woman with a child struggled to pay for the essentials she and her cheerful little daughter needed and to pay off the loans she incurred in order to survive.

This would not happen if the principle of collective universal service provision were applied to everyday essentials of life such as housing and transport, combined with a reformed social security system that gave everyone a decent income. This is the best way to tackle many of the biggest problems facing the contemporary world. It is equitable, efficient and sustainable – and it builds solidarity. For all these reasons and more, UBS offers a progressive, practical and affordable alternative to dependence on cash transfers, loans and market transactions.

If implemented, Universal Basic Services (UBS) could bring enormous benefits to the whole nation, including those worst affected by Universal Credit argues the University College London Institute for Global Prosperity (IGP). Instead of attempting to alleviate poverty through redistributive payments and minimum wages, the state should instead provide everyone with the services they need to feel secure in society. Their radical proposals include building 1.5 million new social homes to provide rent-free accommodation for those in most need.

The Institute for Global Prosperity (IGP) says UBI is expensive. Paying all UK citizens the current Jobseeker’s Allowance amount of £73.10 per week would cost almost £250bn per year – 13 per cent of the UK’s entire GDP. By contrast, widening the social safety net through more comprehensive services would cost around £42bn, which can be funded by lowering the personal income tax allowance from £11,800 to £4,300, according to the IGP’s analysis.

Strengthening and extending universal services would also be a more effective way of tackling global poverty and improving wellbeing than a Universal Basic Income (UBI), according to a report by the University College London Institute for Global Prosperity (IGP) .

We look forward to a potentially better future with robotics and AI. Universal basic services could work better than basic income to combat ‘rise of the robots’, say experts. The team at UCL IGP says the state should make shelter, travel and IT services available to all, free at the point of use, rather than focusing on redistributing money. Could one billion humans be pushed into unemployment by robots and AI software? asks Christine Evans-Pughe .

Robotics and AI offer human beings wonderful possibilities. Arduous or boring jobs could be done, often more efficiently, by robots. These days, 3D printing and now 4D seem to be at the core of most new research ventures, whether it’s developing ways to print entire meals or recreating facial features to repair a patient’s face. Skylar Tibbits wants to up the ante; he’s hoping 4D printing will be the thing of the not-so-far future. Objects could be printed, but thanks to geometric code, could also later change shape and transform on their own.

The key point here is that humans could be released from arduous, unsafe or boring jobs and enabled to do what they do best and gives them most joy, such as engaging in work that requires creativity or the heart, without suffering a precarious or low standard of living.

The Labour Party adopted Universal Basic Services as one of three pillars in their economic platform in 2019.

There is no doubt now that keeping planetary warming within limits necessary for continued human habitation will require transformational change of an unprecedented scale and pace. Such radical change can only be delivered through collective action and UBS may have a key role to play in delivering the rapid and mass behavioural change needed. The Right to a Good Life, Labour 2019.

Irrespective of the merits of Universal Basic Services, chapter 5 is invaluable in describing best practice, in Europe and elsewhere, in housing, transport and information technology in fostering wellbeing and in recognising the importance of the internet as a driving force in accelerating progress towards achieving the UN Sustainable Development Goals.

“If the UK is so rich, why do so many of us feel so poor?  Coote and Percy argue that by rethinking what, how and why we provide collectively, we can ensure that the economy and society works for everybody.”
Jonathan Portes, Kings College London

“In arguing for universal basic services Anna Coote and Andrew Percy call on us to think differently about both the scope and character of public services in rich countries. They do not want free services for everyone, all of the time, but they explain why the state must take responsibility for seeing that our essential needs are met without cost ever being a barrier. These proposals are ambitious but not utopian and sit squarely within the practical traditions of post-1945 democratic socialism and human rights.”
Andrew Harrop, General Secretary of the Fabian Society

“What if there were a way to reduce inequality, promote social solidarity, improve levels of education and health, and create a better functioning democracy, all in the context of sustainability? Universal Basic Services. How does it compare with Universal Basic Income? Read the book. It is beautifully simple in its writing and elegant in argument.”
Michael Marmot, Director, UCL Institute of Health Equity

“Universal basic services speak to the necessity for everybody in a thriving society to have shared experiences and a common understanding of the resources needed for people to participate fully. We do not have that, after years of individualist policies and austerity; as a result our society is fracturing. This book speaks to the urgent need for everybody to have access to collective services that are sufficient to meet their needs.”
Diane Coyle, co-director, Bennett Institute for Public Policy, Cambridge University

I am an author, writer and speaker. I give participative talks in communities, universities, schools and at conferences. My latest book The 21st Century Revolution – A Call to Greatness was Oxford Alumni Book of the Month for November 2016. Professor Katherine J. Willis, CBE, Principal of St Edmund Hall and Professor of Biodiversity, Department Zoology, University of Oxford said “I am greatly enjoying it; you write beautifully”. I update the book through my BlogImages for Blog which includes many other topics.

If you like what you have read and find it useful, please spread the word.