Do not despair. There is Hope!

December 12th was the worst day for British democracy in living memory. Next day, those of us who had slept, woke up to discover that Prime Minister Boris Johnson, a narcissistic, populist charlatan with a dubious personal life, had won an overwhelming majority of seats in the House of Commons. He had achieved this through illicit money and abuse of social media, lies and the clever advice of Dominic Cummins, his éminence grise. The campaign was dominated by billionaire donors, and saw unprecedented levels of misinformation – online and directly from politicians’ mouths. The Tory manifesto was carefully crafted to appear to address the major issues that have resulted from years of Austerity. But can Boris be trusted?

Brexit has eclipsed the existential issues: namely the climate emergency, the high degree of inequality and poverty in the UK and the need for an economy that works for everyone. We are a deeply divided nation. Many of us are angry and depressed, including me. But there is hope as, I shall elaborate in this post.

The UK is a wonderful country that people like to live in. It is full of talented, good creative people. However, it has been let down by the failings of its outdated democracy, in desperate need of reform.  And for forty years or so we have failed to rebuild our economy so that it works for everyone.

It is a triumph for the hard right. And a disaster for those of us who want a fair society in which everyone has the opportunity for a fulfilling life. We can expect further dire consequences for our economy. Labour’s manifesto was too ideological, offered too much and appeared unaffordable. Labour was disunited. Jeremy Corbyn, a good man, was not a credible Prime Minister; he failed to stamp out Anti-Semitism. The centre left failed to collaborate with other like-minded parties. Remain totally failed to make a strong, inspiring case for staying in the EU.

Had there been proportional representation, the outcome would have been very different. If Labour, Lib Dems, Greens and SNP had formed a progressive alliance, they would have held 326 seats compared with Tories and Brexit 298. Parties favouring another referendum gained 52% of votes but a minority of seats .

Researchers at the Electoral Reform Society modelled the General Election result under a form of proportional representation.  Under that system (d’Hondt list PR), the Tory share of seats instead of 57.8 seats would be closer to 45.6%, down 12 from the seats they received under First Past the Post. The SNP – who will also be over represented in the next Parliament because of the current voting system – could see their seat share move to 4.4% of seats under d’Hondt, closer to their actual 3.9% vote share. (The SNP back a move to a more proportional voting system). Other parties would have benefitted from a fairer system – Labour gaining 14 more seats, the Lib Dems 59 more, the Brexit Party 10 and the Greens 11 seats in all.

What about young people whose future is most at stake? Here I am grateful to James Sloam and Matt Henn at the LSE for the chart below showing the deepening of the intergenerational divide following the 2019 general election 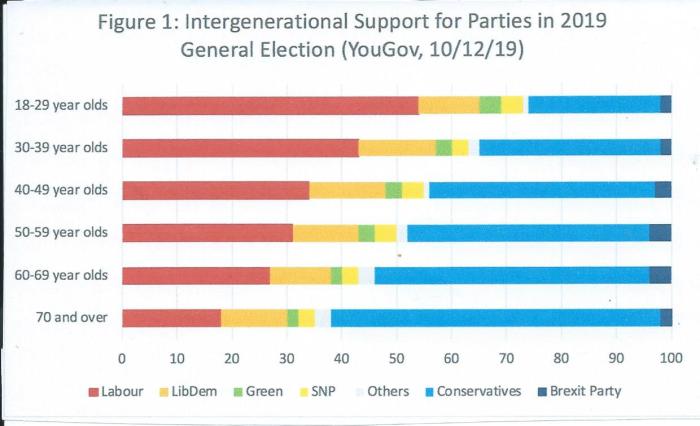 Unlock Democracy say “The Conservatives have won a huge majority on a minority of the vote. Johnson now has the power to reshape our political system to suit him and the interests he represents”.  This article is highly instructive.

However the good news is a further 14 women MPs were elected on December 12, bringing the number up to 220 female MPs. This means there are now 34 per cent women in the Commons – the highest proportion in Parliament to date – yet still seriously under-represented. Some women MPs or candidates have withdrawn because of abuse and threatened violence . Interestingly, Labour has the highest number of women MPs.

Things to say goodbye to according to Compassonline.

Compass say: The problems are there for all to see: in the chaos over Brexit, in our inability to respond to the climate crisis and in an economic system that keeps failing. These are all symptoms of the same disorder: the way we make decisions isn’t working. Our democratic system is in urgent need of renewal. Right now:

At times of social and political change, we need our democracy to keep pace. Today, we are all connected to one another, but our democratic system lags far behind the technology and its promise of participation. To solve the challenges we face, we need to transform democracy to make it fit for the 21st Century and to create a political culture that invites people in, rather than puts them off. Parliament and politicians cannot get this done alone. We have to work together, showing how we can make decisions across divides and find solutions that work for everyone.

To do this, we need a special assembly of the people. ‍Learning from examples around the world, we need to bring together a group of citizens, the same way we select juries, and give them the best advice and the space to think through the challenges. Parliament must act on their recommendations. In the UK, this work has already begun: Thanks to our friends at the Citizens’ Convention on UK Democracy, we have a plan for how to do this and a growing alliance of supporters.

The campaign for PR was begun 136 years ago by the Electoral Reform Society !  We now need a massive popular campaign in which all these organisations collaborate to  bring it about at last.

I am an author, writer and speaker. I give participative talks in communities, universities, schools and at conferences. My latest book is The 21st Century Revolution – A Call to Greatness .  If you like what you read in my Blog, please spread the word.

Best wishes for an excellent 2020!